IT'S A LONG LIFE TO LIVE. I have lived so many lives in just 20 years. Maybe I am lucky with a life of mountains. So low and so high. Just 20 years give's me the fear of the coming ones - there are sill so many years to come. But I am young and there are still a lot of things to happen.

Now, I am at a point where everything will change, lost. But it feels good to be lost in the right direction. Maybe not everything will work out, but maybe seeing if it does will be the best adventure ever. So for know: I am curious where I will be in a year. 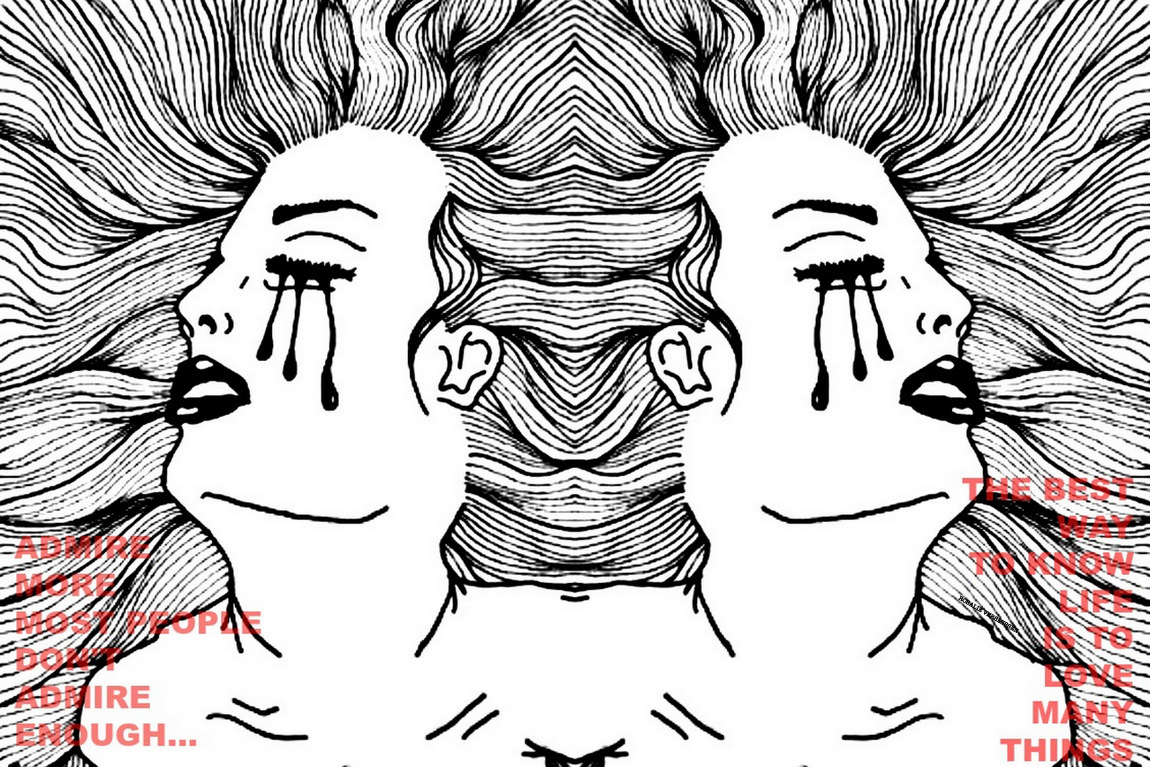 I still am amazed about how much you can do with just a drawing. I started off in my notebook by writing down the quote from Van Gogh: Admire more, most people don't admire enough. I decided to draw something on the page next to it and so became the crying woman. I took photo's of the pages with my phone and send them to my laptop. Like always I decided that my own handwriting wasn't as nice as I thought it would be on the screen. So I decided to open some editing programs I found through google. Made the contrast of the drawing a little bit better and edited the quote in it. And so on and so on until it became this illustration. It's weird how you start of with one idea and end up with something totally different. I like that, I like it how idea follows idea and how they manage to become something. Something you never imagined it would be. It makes me feel happy like a child in a candy shop. I completely forget about the time. I started in the morning, determent to just make a small thing, and ended up late in the evening with " something not so simple".

Both quotes are from Van Gogh, even though the drawing is not made in his style. Van Gogh is probably one of my favorites artists. Not only because his paintings are incredible, but also because he himself is so interesting. Do you know that at one point he ate yellow paint. Determent that the paint would color his organs yellow. He thought that someone with yellow organs could never be unhappy, yellow is by all means a happy color. His life is a sad story about a man who wanted to be happy, no matter what. But like I read somewhere: Perhaps it's good to suffer. Can an artist do anything if he is happy? Would he ever want to do anything? What is art after all but horribel inclemency of life?

So maybe that's what I tried to capture, that something so sad can also be beautiful. 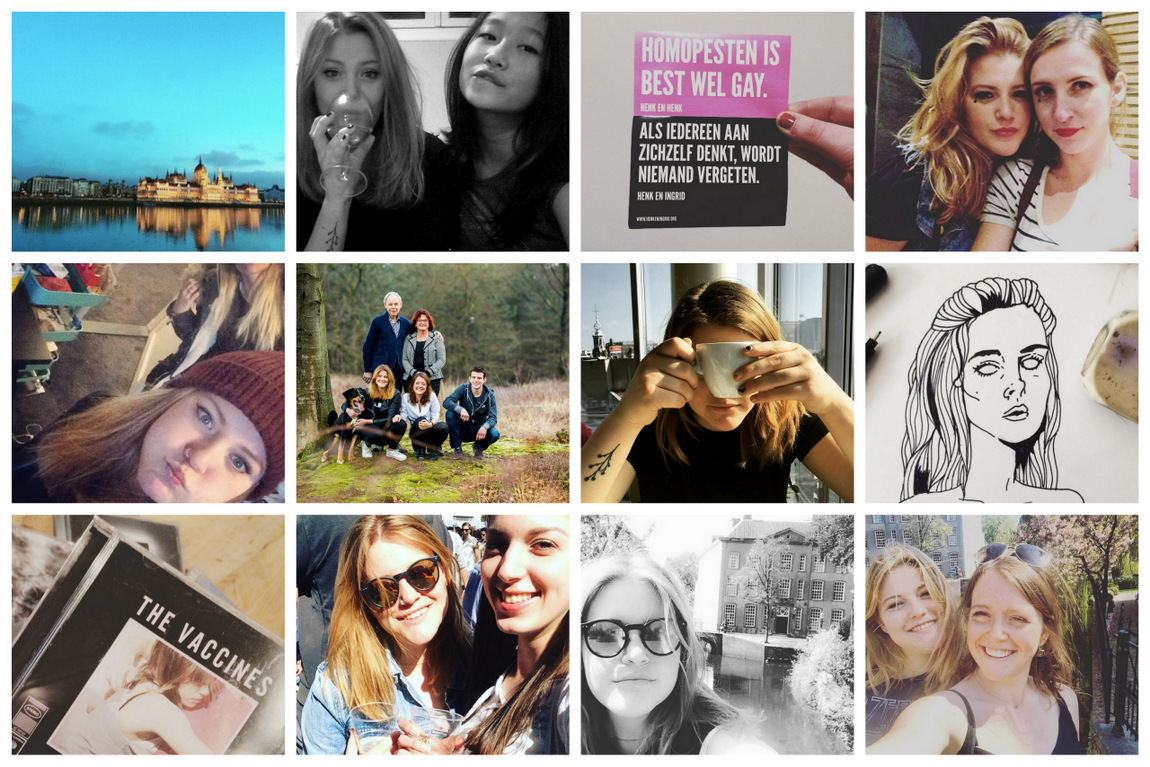 from left to right, what I've been up to for the past months

1. How to start a year better than to travel? I've never really mentioned it on Silence & Noise before but in the first week of Januari I flew off to Budapest. Months later and it still is one of my favorite memories of the year until now. It was totally random booked at sprs.me ( which means that we only knew a couple hours before we flew what our destination was going to be.) Budapest is really a beautiful city. I don't really have a lot of recommendations because we mainly walked through the whole city until we bumped into something beautiful.

2. The goodbye party of a dear friend. She took off for five months for an internship in Shanghai. The months are almost over and I can't wait to see her again! Although I really missed her for the past months this evening was amazing. We took a lot of photo's with the three of us, made music, laughed and finally went clubbing.

3. Two stickers I got from a friend of mine. I both put them on a mirror in my room and they always make me smile.

4. CARNAVAL! I can't believe it's been that long ago already. Like every year this year was full of early mornings, dancing in parades and beer the whole day long. Every time it is an highlight of the year.

5. The photo may be silly but that day is a day to remember. I don't think I will ever forget it. One of my housemates and best friends decided out of the bleu that she wanted her tongue pierced. Like always I was the chosen person to go with her to the tattoo and piercing shop. It had been a while for me too since I got something new, and for some reason I tend to get nervous when I don't change something now and then. Since we decided to get her tongue pierced that evening I thought that it would be fun to get something too. Until the minute we walked into the shop I doubted what to take. And so happend my second tattoo; a small moon and a star behind my ear. We both smiled, it is so "us" to do this kind of things.

6. A while ago we had a photoshoot with whole the family ( including the dog ofcourse) We couldn't have picked a better time to do this. Don't you think my hair and outfit match really good with the dog? Kinda creepy..

7. This photo was taken when a friend an I went to LONDON CALLING in Amsterdam for the weekend. We both knew some small bands that were coming. It actually really felt like a weekend on vacation, which was exactly what I needed.

8. I picked up drawing again, but I think you already've guessed that.

9. recently I found some "old" CD's in my room at my parents place. My music taste from two years ago was pretty good, so I try to re-discover it.

10. Liberty day, the 5th of May. It was a really nice day. Live music, drinks, my best friend an the sun all day.

11 & 12. Two weeks ago I went to Amersfoort with my parents to meet my sister and her boyfriend there. It felt like a hot summer day on vacation. I've been once in Amersfoort before but none of the others had, so we walked around discovering the city and went to "The house of Mondriaan" which was more interesting that I thought it would be. It had been a while since we did something together as a family, I almost forgot how much fun that could be. 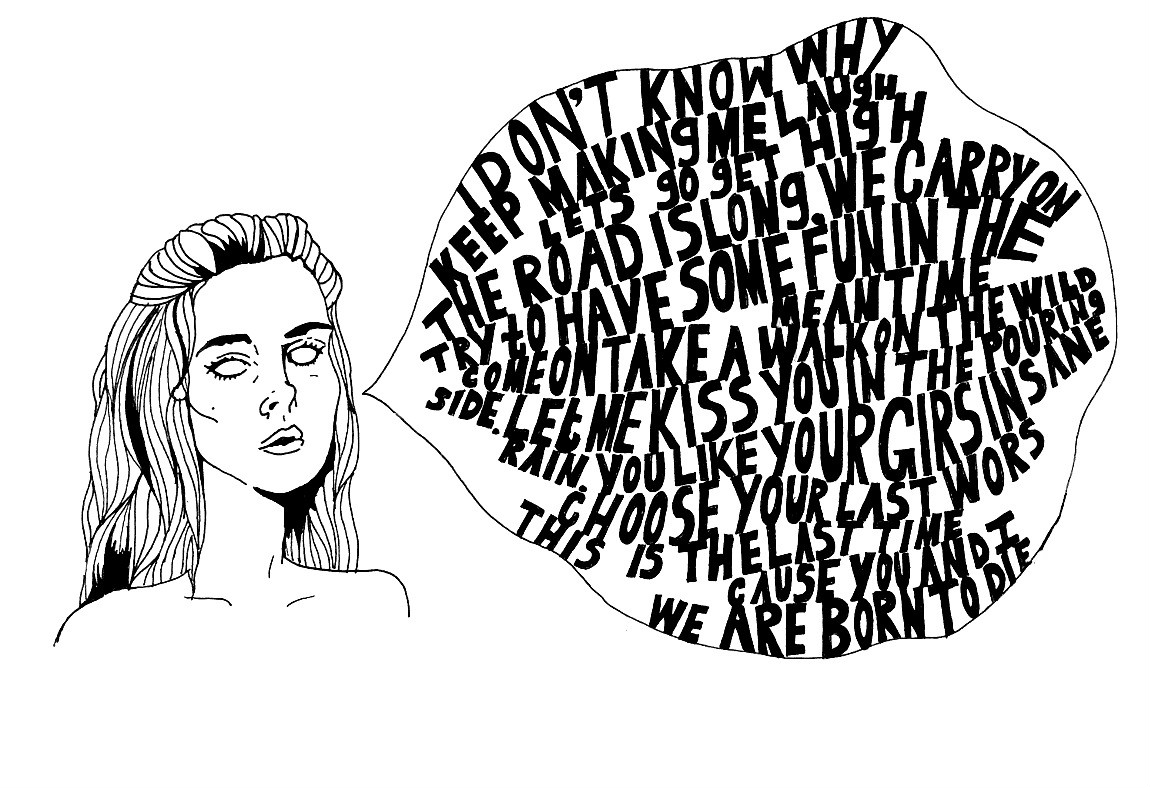 I am going to start a new "series" with drawings of some of my favorite artists.

I actually never really liked Lana del Rey. Her music seemed to soft for me. I liked hard guitars and a beat faster than I could dance on. Yet lately I've turned around. It is dark, it's poetic, sad and dramatic.  Just as I like the movies that use her music in their soundtrack. Pour myself some wine, put on her music and flow away on a hot summer day. Lose myself in the lyrics. Act like my life is a costume drama of 2 and a half hour where it is allowed to be over dramatic, to surround yourself with empty bottles, smoke a lot of cigarettes, dance around like nothing matters and all we care about is having fun.  Because now we are young and free.

TENERIFE #2 FEEL THE FEAR, DO IT ANYWAY 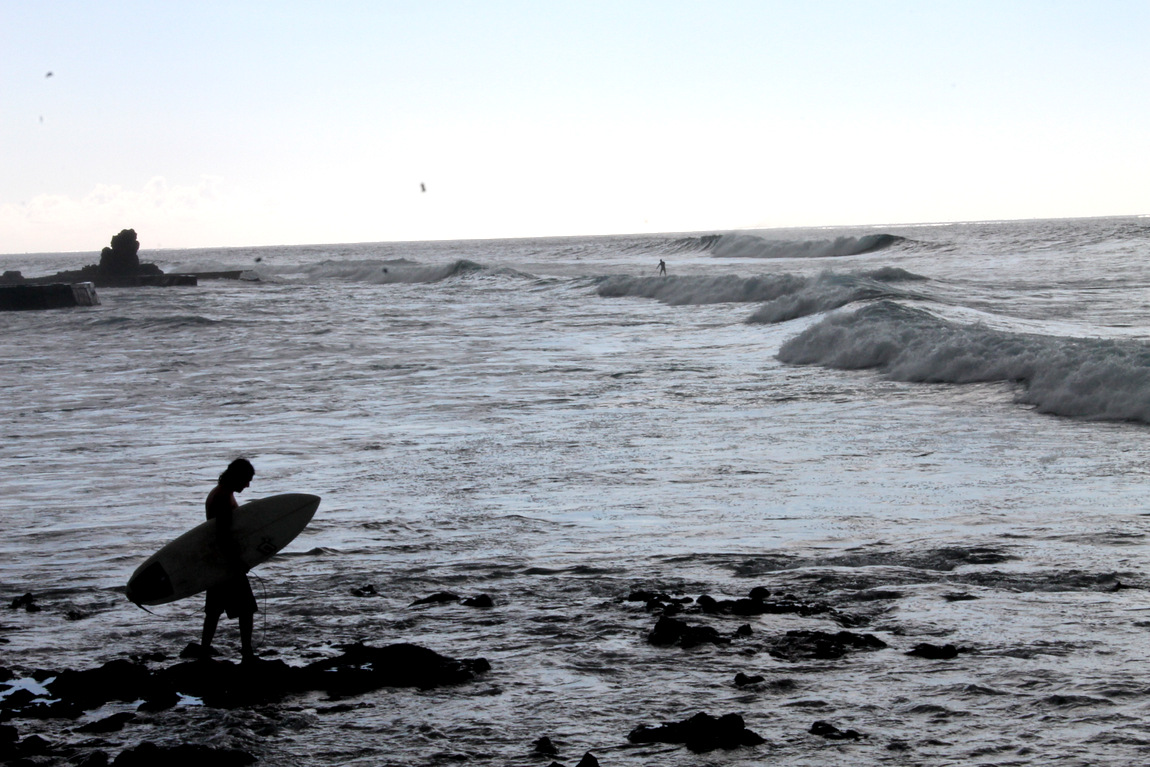 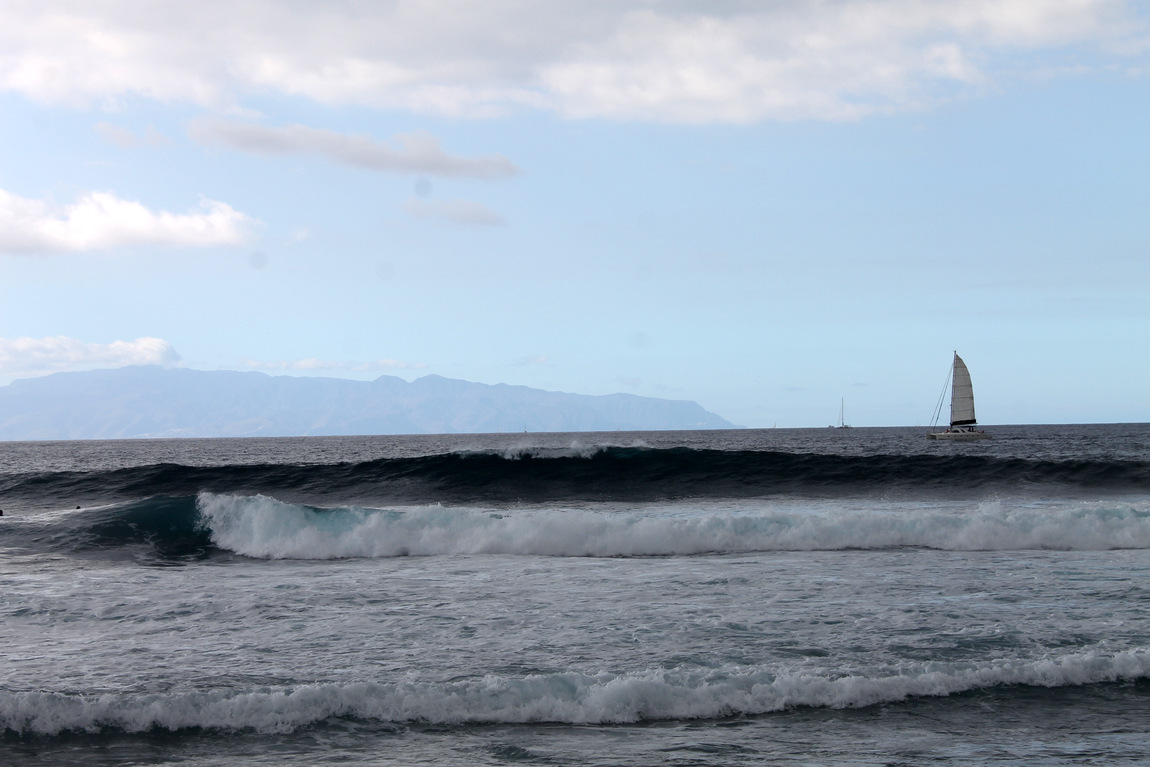 The sea side. in the touristic South. The part of the Island where the temperature nearly does not change during the seasons. Where surfers enjoy the big waves from dawn to sunset. Where the salt air makes your hair curly and the sound of the sea is always on the background.

There is something so lulling in the sound of the sea. Yet the way it can be calming song or destructive nightmare is something so curious. Perhaps if the sea was a person it would be an old, bearded and happy man with so many millions of years worth stories that we'll other wise never know. Nostalgia streams through your veins, fear of the unknown.

That day I experiences both sides. I love the sea, the water, while we were sliding over the water on the small boat. The sun burned on our heads while the tourist guide explained some facts about the whales we were about to see. As I am afraid of any kind of fish or animal that lives in the sea the choice to spot hem was not made by me. Yet like every year I cannot deny that it is something beautiful to see. The big creatures under the water, the soft waves that makes the boat move on a beat. The tourist guide had an other theorie about the sea, while we were softly bounced back and forwards he said; " The sea is like a woman, when she is calm she is the most beautiful thing to look at, but when she is angry - you better run."

That evening we decided to go jet-skiing. We waited long for the guide to come back with the previous group. While we waited it got darker and darker and by the time he finally came back we would only have 30 minutes left before the sun went down. Since there are no lights on the Jet ski it is not recommended to go onto the water this close to sunset. But we already paid for our hour and so we went. While we drove out of the harbor we saw people shaking their heads to our guide. They called us crazy for going on to the sea this late. Like I've already told you, I am afraid of  the sea. I am afraid of fish and big waves and my fear grew bigger and bigger while we were sliding towards the open sea. There was only a little bit of sun left to give us light. Then, the second we got out of the safe walls of the harbor, our guide went off. Soon we almost lost him out of side. My brother, who controlled the Jet ski, tried to go after him. It was both our first time on a Ski and the sea beneath us looked like big black waves who wanted to take us with them. We went faster and faster, the salt water made our eyes water and some times we flew through the sky for a few seconds before we landed hard. We attacked the sea while we flew harder over it. My brother and I went faster behind our guide and I knew we were both afraid. In that moment we both started to laugh really hard. While the tears streamed down our faces and our bodies were stiff from fear we laughed because it seemed like the only logical thing to do. I took a breath, felt the adrenaline and shook hands with fear. My body relaxed and while the sun was already vanished behind the sea, the waves became bigger and the sea only more terrifying, I relaxed and enjoyed the trip.